This just in. John Kimantus has purchased Wavelength magazine. He will assume the editors roll this fall. Kimantus is the owner of Wild Coast Publishing, which publishes kayaking guidebooks, maps, and a new kayak magazine called "Wild Coast Magazine."

His products come with a high degree of professionalism. They look good and clearly reflect Kimantus' journalism experience.

Kimantus is a strong advocate for kayaking and not afraid of taking on controversial issues. This spring he sparked a voracious on line debate with his strong stand relating to Native Land Claims. Kimantus was concerned that current and future land claim settlements might have an impact on kayak access to the west coast.

As he's in the guild book and kayak map business access availability could have a tremendous impact on his business.

Having strong views and willing to raise controversial issues are two qualities that make for a great publisher. Hopefully Kimantus will help push kayak publishing into the future. Kayaking has matured as a recreational industry. It's time for kayaking journalism to morph as well. In the past some kayak magazines where little more then news letters around which advertisers could hang ads. Magazines willing to take on issues that face kayaking would be welcome.

This is territory already explored by Scott MacGregor publisher of Adventure Kayak. But I'm sure he'd welcome some company.

Visit Adventure Kayak here.
Posted by Victoria Kayaker at 9:25 AM No comments:

In Praise of BC Health Care

Health care services are under great stress. Not enough Doctors, money, nurses, hospitals coverage, the issues seem endless. While all these issues are complicated and seemingly without solutions I want to relate my praise for the BC Health Care System.

Earlier this week I was checked in for day surgery. I have had a possible cancerous growth removed. I will know within 10 days if it was malignant. From the time I checked in to the time I left the quality of care and attention I received was great.

Things were explained to me, countless times, the health care professionals were courteous, kind and even humorous. The hot blankets were great. My day surgery took fours hours. I hope my employers don't find out there are people out there who can squeeze a days work into four hours. They will be asking me to do it next.

While this may not be kayak related some of us belong to that baby boomer generation that's getting on. Don't neglect your health. Get check ups and take care of yourself.

There are three things required to be a proficient kayaker. Hard skills. The braces, strokes and boat handling techniques that we learn hopefully from truly knowledgeable sources - professional coaches or competent mentors.

Second is knowledge of the environment. How to read the wind, waves, weather and water is an acquired skill that takes a long time to accumulate.

Those three things also apply to our health. Take care
Posted by Victoria Kayaker at 11:14 AM No comments: 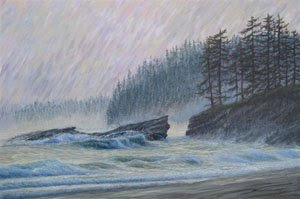 In the winter of 07 the West Coast Trail on Vancouver Island was hammered by two back to back storms that brought down trees, and washed out large sections of the trail.

When spring rolled around Parks Canada had to close the trail just so crews could get in and clean up the mess. With no one on the trail it would have been an ideal time for a kayak tour along the coast. Bamfield down to Port Renfrew in three or four days would have been ideal.

With that in mind I wrote to Parks Canada, outlined my plan and volunteered to prepay the camping fees.

The e mail I got back said kayakers were not allowed to land and camp along the trail. That struck me as rather ironic. The trail opened to save mariners was no longer open to mariners - unless I supposed I wrecked my kayak upon landing. Always a possibility on that part of the west coast. The letter went on to encourage me to kayak/camp in the Broken Group. No thanks. I soloed around Cape Flattery instead.

I'm not easily discourage so this year a second e mail solicited a much more positive response. The trail is open to kayakers and always has been. The first e mail seemed to have been over zealous.

Parks Canada's concern is that the route not become so popular as to attract novice, beginners, or those intermediate kayakers who have been around for years but have somehow failed to advance their skills, knowledge and judgement.

Barb Brittain Communications Coordinator with the Pacific Rim National Park Reserve Wrote"We see very few kayakers along the West Coast Trail due in part to the very exposed nature of the coastline with relatively long stretches devoid of landing locations and the high percentage of surf landings where kayaks can come to shore. In short the West Coast Trail is a stretch of coastline that only very skilled kayakers should consider."

I count those as very wise words.

Most kayakers circumnavigating Vancouver Island do this section of the West Coast with only one overnight along the trail. They slip ashore late in the evening and are gone early the next day.

As the trail is so close to the finish point in Victoria it gets short shifted by kayakers who have to put in long days and cover lots of water to complete their journey.

If you plan to paddle and explore this coast Parks Canada would very much like kayakers to purchase an over night use permit. In fact they require it. The permit cost $127.50. The hiking fee is $166.00 and includes two ferry rides. One at either end.

There's no waiting list if you plan to kayak. The permit can be obtained at either trail head. Payment is taken when the permit is issued. All hikers go through an orientation session with prior notice staff can modify a presentation to address the points that would be relevant to kayakers.

Parks Canada is currently developing seven back country or marine accessible camp sites on Narvaez Bay on the south end of Saturna Island.

Although it's been widely reported that you can now legally camp on Saturna, the actual camp sites won't be ready until the first of June. Parks Canada will install either tent platforms or tent pads.

The camping area will be located on the southwest shore of Narvaez Bay where the current day use area is. Expect to pay at least $5 per night to camp. The site currently has an outdoor privy. Bring your own water.

Although Narvaez Bay is exposed to southeast storms the small half moon beach behind a fish hook point will provide excellent shelter for anyone caught out in worsening weather.

Hats off to Parks Canada and the planners with the Gulf Island National Park Reserve. They worked with the kayak community and responded positively to requests for just such a camping facility.

http://www.pc.gc.ca/pn-np/bc/gulf/index_E.asp
Posted by Victoria Kayaker at 3:53 PM No comments:

Here's a twist on the ideal Mother Ship, the Dodge Sprinter. These units are becoming popular with people in the kayaking industry.

Saw one two years ago at the West Coast Sea Kayak Symposium. It was kitted out as a sort of big brother modernized Westfalia clone. Very slick. Now Kirby Stevens of Coastal Waters Recreation Maps has one.

With a dieasel motor they're more economical then gasoline power units. Add a side lifting roof rack system and you can easily load your kayaks. Inside you can kit them out for camping or order them already built. Transportation and a great base camp all in one unit. Only $45,000!!
Posted by Victoria Kayaker at 7:36 PM No comments: 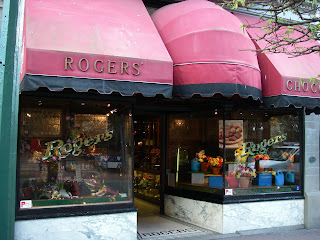 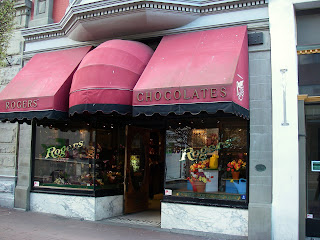 Rogers' Chocolates quickly backed off on plans to expand the heritage chocolate shop on Government Street in down town Victoria.

When it was discovered Rogers' had sold out to a Toronto based food processing giant, the good burgers of Victoria almost spit their maple creams out in shock and dismay.

What's this to do with kayaking? Not much. However the consumption of chocolate during kayaking lunch stops on the west coast has always meant at least one communal sharing of an extra large chocolate bar. The better the bar the better the impression made.

The other tradition is to finish the paddle in either a pub or a coffee shop. Newbies should of course stand for the round.

Posted by Victoria Kayaker at 3:29 PM No comments: