Return of the Romany 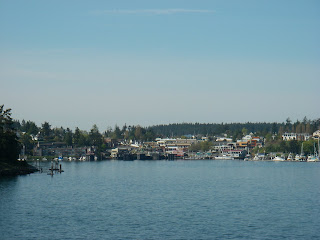 Can there be anything better then sailing into Friday Harbor on a sunny Friday morning.
We're almost home. Ten months after completing my Isle of Man circumnavigation my kayak has almost made it home.

Thanks to the graciousness of Shawna Franklin and Leon Somme' I did not have to travel down to the Seattle/Tacoma docks to retrieve the kayak. They picked her up and brought her up to Orcas Island.,

I had hoped to paddle it the 25 nautical miles from Orcas over to Victoria. But time simply didn't allow and I ended up having to drive around to collect the kayak. Which turned out to be a good thing as someone had nicked two of the hatch covers.

This is a lucky boat even when bad things happen to her she somehow manages to turn misfortune to an advantage. On that last day on the Isle of Man when the hull was accidentally cracked and the last 10 days of my adventure literally slipped through the crack; it was a turn of good fortune.

Trapped ashore for those ten days I was able to save the money budgeted to cover the expenses of what was to have been the circumnavigation of Angelsey. With the money saved I was able to buy airfare home after the air carrier Zoom went bankrupt taking my return ticket down with it.

Zoom was to have returned the kayak with me. Luckily Nigel Denis of Sea Kayaking United Kingdom stepped forward and offered to send the kayak in the next available container to Seattle.

As I write the kayak is down below on the ferry into Sidney. She's looking a little rough. Dust from ten months in the work shop obscures her bright red deck. The skeg still needs a little work, I'll have to add the keel strip that was over looked. However the cracked hull has been repaired.

The biggest problem to over come will be the hatch covers. Without them she's not sea worthy. But I'll improvise.

I want thank everyone who took part either as a contributor to the Canadian Cancer Society or as a direct or indirect sponsor. Together we raised $5,800 to help in the fight against cancer. A special thanks goes to Nigel Denis, Shawna and Leon.

Foot note
After a week in the garage the preliminary keel strip has been added to the Romany, it still needs a little work. I'm not very good at gel coating but it'll due for now. late yesterday afternoon the kayak was introduced to the Pacific Ocean for the first time. It felt great, indeed she performed every bit a well as my limited memory recalled. Short smooth turns without any drama or suspense, she picks up following waves like a dream and surfs better then the surfer sitting in the cockpit. I'm going to really love this kayak.

After standing back and assessing the keel strip I added I contacted Peter Harris of Pacifica Paddle Sports and will have him tear the strip off and replace it. I learned two lessons from this exercise don't gel coat in the garage when the wife is home and keel strips are a lot harder to do then small repairs.
Posted by Victoria Kayaker at 10:10 AM No comments: