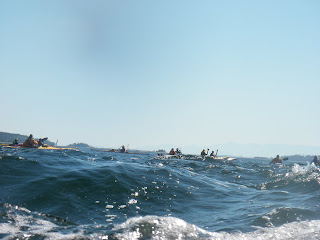 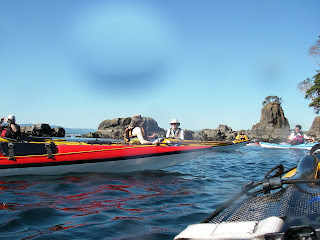 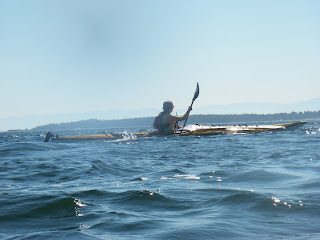 I don't normally paddle with such large groups but after being bounced around the Irish Sea on my own I felt an urge to socialize. Two things stand out in my mind regarding Sundays trip.

First was the remarkable cohesion of the group, with the exception of myself everyone stayed together. Being the lazy paddler I am I opted to veer off to ferry glide across one of the current channels. I just could not help myself.

The other aspect of the trip was the speed. I didn't track the overall speed of the group but I know we were back an hour before the predicted return time and at least an hour and a half ahead of my guess.

These two things are significant. I have often been critical of club paddles that don't adhere to the basic tenant to stay together. It was good to see that; 'things', they are a changin.

Praise goes to Mike Jackson and Susan DuHammel the organizers for making this work.

I was also surprised by the depth of knowledge that people have of the Isle of Man. Two “young”, paddlers regaled me with their stories of visiting the Isle of Man to watch and ride the famous Motorcycle Time Trial course. As well as attending the races one use to visit the Isle to catch Tommy Dorsey and his big band at the opera house in Douglas, that's well over 60 years ago.
Posted by Victoria Kayaker at 4:11 PM No comments:

Good news came my way yesterday. My friend and urologist Dr. Iain McAuley gave me the news – there was nothing on the scope. This means that after a seven month battle I am now cancer free.

The flip side of the news is that there remains a one in four chance of the cancer coming back; that's if I do nothing. If I continue with the BCG treatments I can greatly reduce those odds.

The hard part will be completing the treatments. Only 18% ever see the treatments through to the very end. Of the 82% that don't complete the treatments many are forced to quit after developing the TB side affects associated with BCG. Others pack it in fed up with the invasive and not very pleasant experience.

I've signed up and will resume the treatments in October. I'll have to see how far I can make it down this road.

Apologies to my good friend Martin.
Posted by Victoria Kayaker at 4:02 PM 1 comment: