Why British Boats Are Built The Way They Are 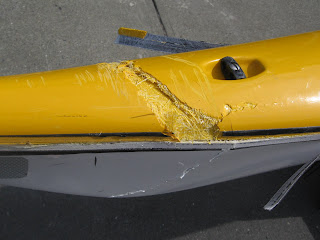 This is the stern section of a Valley Boat built in England. The owner was playing in Deception Pass (between Whidbey and Fidalgo Islands Washington State) on the flood when he got caught in a whirlpool, went inverted and snagged the stern in a crevice in a rock wall.

The stress on the boat caused what witness described as an explosion. One witness said he looked up at the bridge thinking there had been a car accident.

Once ashore the stern was taped up and the boat was paddled the next day in Deception Pass. Within hours word of the accident had reached East Sound on Orcas Island and paddlers started making their way down to Deception Pass to see what was up.

Today the boat has been repaired and is ready for another full on adventure.
Posted by Victoria Kayaker at 9:14 AM No comments: 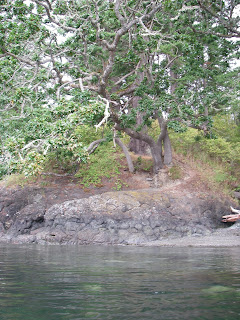 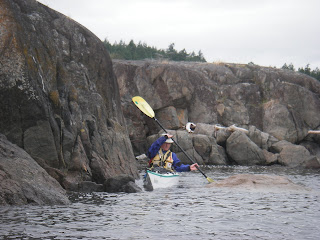 Ah the joys of have three days off. Perfect for two paddles with a day of rest in between. Sunday Aug 5th I hooked up with my old friend Bill and along with a group of Victoria paddlers struck out from Sidney BC to Rum Island percjed on the edge of the USA. We made our way through the Little Group Dock and the north side of Forest where big money from Montana via NYC has made some very dramatic changes to the islands shoreline. We slipped into the take out spit the connects Gooch Island to Rum about 90 minutes out from Sidney. Just off shore was a fine long low off shore yacht. Easy on the eyes while the mind fills with dreams of sailing off to circumnavigate the Pacific.

Rum was very dry and it looks like there has been lots of wind damage inside the wooden heart of the island. It was nice to see Parks Canada has built some nice tent platforms. I might return with a screw driver and add some tie down points so people will be able to secure their tents when it gets really windy.

Lunch was a two hour siesta. In which we regaled ourselves with various accounts of our prowess. Whenever one gets drawn into one of these sessions it's important to never go first. I did listen with a peaked interest to Rossco's tale of never leading another "club" paddle as the skill level of the local club members was greatly lacking when the wind came up. Been there done that. It's the age old conflict between being a social club and a centre for developing kayak skills. I'm glad not to be a part of that scene.

Two days later I made a trip from Albert Head to Whitty's Lagoon with Michael Jackson. We should have done a sea pup count. The cute little guys where everywhere and often very courious. As much as we could we attempted not to disturb them but often they'll come to check us out while we simply sat still in our boats. One little guy slightly bigger then my paddle blade kept swimming back and forth under my kayak. I was content to sit and stare back. I reason any moverment to pull out the camera would spook him so I simply watched until some other aquatic diversion drew his attention away and he was off.

Just tot he north side of Albert Head the kelp has come under some very serious attack. The leaves are either completely eaten away or in the process of being consumed by what appears to be donut like egg casings. These casings have also fixed themselves to the stocks and floats. The kelp floats are bleached out in colour and some appear to have been sliced along the horizontal axis. Very strange. We both snapped some pictures and Mike promised to send them off to a marine biologist he knew at the Bamfield research centre.
Posted by Victoria Kayaker at 8:28 PM No comments: