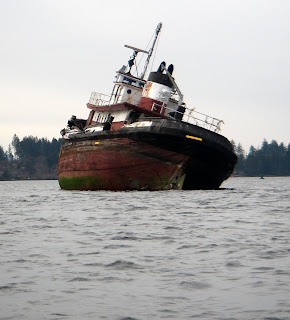 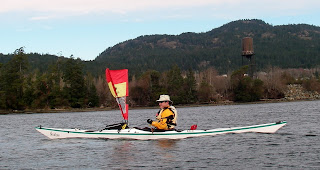 Out early to hook up with a group calling themselves, Sea Kayakers Unincorporated Club Sooke, (SKUNCS). My apologies if I have the acronym and name wrong. I generally rail against these sorts of things as I find myself surrounded by them in my work life.

We launched from Canoe Cove. It's the muddy little bay at the bottom of the hill as you approach Sooke. There's a small kayak shop, best know for it's dubbie like atmosphere. When ever I leave that shop for some unknown reason I'm graving a pizza. The other establishment on the cove is a restaurant. Yesterday it was between bankruptcy filings and was actually open.

Once out into the basin we were pushed along by a nice breeze which meant the sails had to come out. Mike's got a couple of rigs and always has one handy. Our new found friend Gerhardt pulled out this contraption that resembled one of those sun sreens that seniors put up inside their cars to keep the sun from fading the interiors or heating it up to oven temperatures.

With the addition of a couple of lines, a plastic panel to enable you to see what you are about to run into, and a few snaps and presto you have sail that will propel you along at least as fast as you can paddle and occasionally faster. 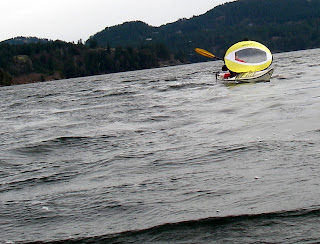 With the lines strung under your arms and around your back and the sail snapped onto your forward bungees you also have a nifty little entrapment device once you go over. I hope the manufacture factored in some sort of break free mechanism or at least loaded up on liability insurance.

But the true star of the paddle was the tug aground in Sooke Harbour. According to the locals the tug had been moored in the harbour until about six weeks ago. One night during our frequent winter storms it slipped it's moorings or dragged it's chain and anchor until it ran aground and sprung it's slates. Soon it was full of water and stuck fast.

People have been seen aboard. No doubt some of the more infamous local characters have gone aboard in the interest of saving anything of value from falling into the ocean, being lost, and profiting no one. Someone has recently unsuccessfully attempted to set it afire. Once down wind the stench of smoke emanating from the hulk is rather uncomfortable. Best to stay upwind. 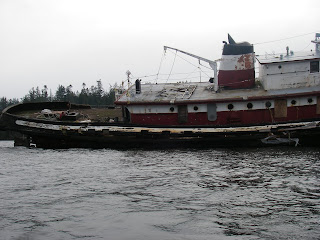 From the long beautiful lines she must have been a deep sea tug. Just barely visible on the thwart is New Westminister BC. Clearly the original home port. Also visible is a Washington state registry and part of the name. 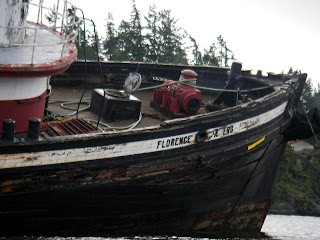 She would have made a wonderful mother ship. Imagine spending a day gunk holing, surfing and bashing your kayak about on the north coast followed by a hot shower, three course meal at a table, warm accommodations, and a glass of fine whisky to finish the evening.

We left our host at the tug and made a quick sprint to the in-laws house for a cup-a-tea, but there was no one home. So we scarfed down lunch and headed back just in timne to reunite with the gang at the put in. We turned down the kind invite to join everyone for soup. We had our own tradition to up hold - a cool pint at the 17 Mile Pub.
Posted by Victoria Kayaker at 11:27 AM