Tiderace Makes a Splash in Victoria 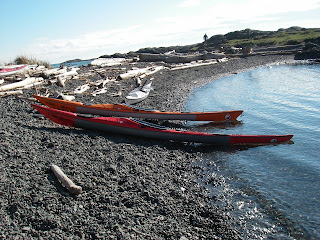 Feb. 22/08: First rate finish on a British kayak! Well sort of, if you consider Poland part of Great Britain. Mike Callaghan of Ecomarine Marine Vancouver graciously brought over a Tiderace Xplore and the smaller Xcite for local Victoria kayakers to demo.

The back story on Tiderace can be traced to Rockpool co-owner Aled Williams. Williams not content to rest on the laurels of the RockPool boats struck out on his own. His endeavours where temporarily grounded when his new company, Inuit, ran a fowl of the real Inuit, who insisted they had dibs on the name. Mr. Williams wisely changed the name to Tiderace.

They say imitation is the most sincere form of flattery. Unfortunately the Xplore fails this test. As the story goes Nigel Dennis was not very flattered when Williams named his boat after the venerable NDK Explorer. A quick look at the two and you can see why. The original Explorer is a fish form hull the imitator has a swede form hull.

In the fish form Explorer the widest part of the kayak is right at the paddlers hips. In the swede form Xplore the widest part is just aft of the cockpit which is well forward.

These two features combine to create a boat that handles very differently then the neutral handling Explorer. The Swede form has a higher hull speed and is very fast to accelerate. Catching waves is easy, staying on them is harder thus going down wind is quite different in the Xplore. In fairness I've learned to use the skeg to help me trim the Explorer when surfing, but that's got more to do with my skill or lack of then the boats capabilities.
All the Tiderace kayaks come with four KajakSport rubber style hatches. There are large ovals front and back, a day hatch oddly placed in the center behind the paddler. Access this while under way exceeds my flexibility. There is a small but welcome day hatch directly in front of the cockpit. Major manufactures, if they have any concern for customers, should copy this feature. It makes perfect sense.

Unfortunately there is no place to fix a compass unless you glue or fix it to the forward oval hatch or use one that hooks on to the deck lines. In a boat that describes itself as an expedition kayak that's an oversite.

In my lexicon an expedition is a trip into dangerous and inhospitable areas such as around Iceland, the south Island of New Zealand, or South Georgia. A trip out on the west coast of Vancouver is a cruise by comparison that can be made in a lot of the boats on the market. Yes it can be dangerous but just about anyone can do it if they exercise good judgement.

Thus if you call your kayak an expedition boat you should meet the highest of standards. The Explore does this in terms of layup and finish. It's beautiful and surpasses a lot of boats on the market. 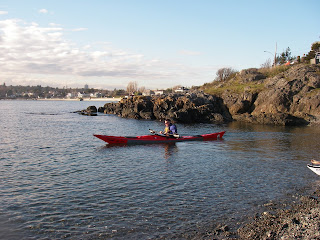 Inside the cockpit your feet rest on a foot brace designed to give you maximum push from the bottom of your feet. This helps get all you leg muscles including those massive quads into your forward paddle stroke maximizing the efficiency of the stroke. The downside is the plate means you cannot add a foot pump.

If you have short legs you'll also end up with some dead space between the plate and the forward bulkhead. A small gear bag could be stored here but you'd have to remove the plate and reinstall it every time you wanted to get at the gear. Turning out four hand tensioned knobs enables the foot plate to come out of the cockpit.

Another down side of the foot plate could be fatigue on those long distance days that expedition kayaks and kayakers have to put in. There is no place to stretch out cramping legs, no way to forestall your feet from falling asleep.
The seat can also be adjusted for and aft to change the trim of the kayak. Owners will likely do this once, dial it in and leave it. Which is also cool, kind of like getting the racing seat on racing bike set up perfectly for the rider.
The Tiderace kayaks are manufactured by Plastex in Polland. Plastex is the world leader in the construction of Olympic racing canoes and kayaks. Their excellance really shows through. The quallity of the layup is first rate. The hull has no flex that I could find. It's stiff. The deck appears to be equally as strong. 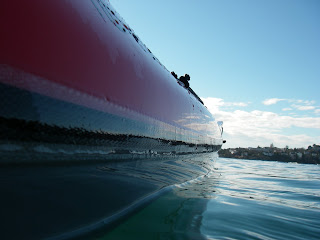 Layup on the Xplore comes in three options. The Xplore was the middle or mid level layup and the Xcite the basic layup. Although both are stiff and strong they are also quite light to lift and carry. The ultimate layup has no fibreglass, which means it'll be expensive. The penultimate has a combination of glass and a proprietory cloth.

One often over looked advantage of fibreglass is how easily it can be repaired. I'm not sure how easy these exotics would be to fix in the wilds. I know of a Nordkapp with it's stern ripped almost completely off, taped back together and paddled. That's a severe test but expedition kayaks should be able to meet it.
Out in Enterprise Channel where a good strong flood was in play the Xplore showed some good performance characteristics. In the chop it's well behaved, with great initial stablity, it instills confidence. What impressed me was how quickly it could be accellerated to catch the standing waves. Cool! Now if it would only stick there like a Nordkapp.

I found the Xplore tended to bury the bow easier then my NDK Explorer. Probably because of the more forward cock pit and the smaller volume forward. Still I would not hesitate to take this kayak into a challenging tide race. Into the rocks might be different.

One of the testers gathered on Friday described NDK kayaks as being brittle. I don't know what this means and would welcome an explanation. I've thrashed mine in all sorts of rock gardens, seal launching and even Maytagged it in boulders. But it's never broken or snapped in a brittle fashion. I've come home with the gelcoat spider cracked but the kayak has always remained sea worthy and come through places where a lot of kayakers won't even go.

I am so envious of the Xplore's cockpit rim. It is far superior to the ridiculous rim that curses all NDK boats. Those rims with their pointless wide lips channel water under spray skirts ensuring you have a wet ride. Why sit in water if you don't have to. Why stand in the mid day sun?
The other boat Mike Callaghan brought over the Xcite is a smaller day boat aimed squarely at the NDK Romany market. With hard chines the Xcite is a true tracking boat that is also easy to turn by simply putting it on edge. It's a fine boat. Personally I'd take a Romany Surf as my own choice for a day boat.
The Xcite has very aggressive thigh braces. So aggressive that I found it difficult to, uh well do a wet exit. Yes after about a year and a half I failed a roll. Of course it was in front of an umimpressed audience. Although initially hard to get out getting back in and rolling up was no problem.

Both kayaks come with a Keri-Tek skeg. The skeg boxes are designed in house and are extremely small which maximized the storage space. Very important in these smaller expedition boats. I could not see how the skeg wire attached through the box. Also the skeg is small in comparison to the dagger like NDK skeg.

An aside. I once heard a well respected guide and instructor explain the reason NDK kayaks track so well was because of this dagger board like skeg. I cannot confirm this because in three years I have never fully deployed the skeg on my Explorer.
From a performance perspective I would not say that the Xplore is better then an Explorer from NDK or a Nordkapp from Valley or even the Chatham from Necky. Different yes but not necessarily better.

However there is no question that it has a superior layup and build quality. In any battle be it for market share or for hearts and minds, you attack your competitors weak points. Tiderace has successfully done this by focusing on picture perfect finish and fit. But head to head on the expedition performance field I think they have a ways to go.

However the Xplore will have an important impact on British kayaking. Either the venerable old companies are going to start taking quality control seriously or risk losing market share. This will be especially true in North America where consumers expect that for $4, 000 the boat should have zero deficiencies.
Another aside. During this event the NDK kayaks where the subject of very dismissive remarks. Remarks that I believe pertain to every kayak manufacture out there. "That companies boats will be made by political prisoners in China," is a phase I have often heard. Well according to a person who was there one very large Canadian company once employed upwards of 20 prison inmates in orange overalls all wearing ankle bracelets to lay up kayaks. What's the diff. 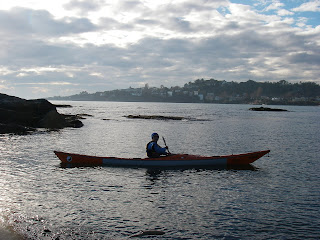 And what about those North American manufactures whose shipments are rejected because of poor quality. Fact is working in glass and resin is a crappy job that will always attach the dregs or the desperate making it hard to ensure great quality. That's not an excuse it's just the truth.


Posted by Victoria Kayaker at 6:21 PM