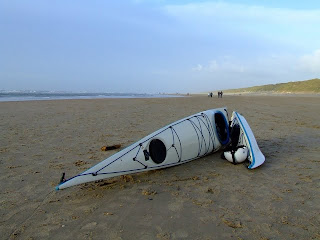 It has been fine fall kayaking here in the Victoria area. Last Wednesday we managed to find standing waves in Baynes Channel right off the reef at the end of 10 Mile Point.


With a fast ebb coming around the head land slamming into a steady 10 knot wind the waves were stacking up into three footers. As usual most of the waves failed to line out which made surfing difficult. Nevertheless Denis, Mike and I managed to get in some good rides.

My advice to anyone entering this tidal race is to do so from the top of the race and slide into the leading wave backward. On this day we slipped by the reef buoy and attempted to enter from the bottom side.

We'd paddled out from Cadboro Bay and as we approached I stopped to switch my ball cap for a neoprene cap. You know the type that holds the cold water close to your head ensuring the freezing water gets deep into your ear canals. Who thinks these things up?

As we approached I thought to call out to my companions to slip through the inshore channel in front of the Williams/Green's house (it's made of glass and brass). Once through the channel we could stay inshore then swing out to drop into the race. For some odd reason I didn't, I guess I secretly wanted to see what would happen.

I was first to enter and the fast ebb quickly sent me too low and past the first wave line. I was in the chaos where surfing becomes secondary to just staying up right. I fought my way out with a major forward stroke effort that foreshadowed the next 20 minutes.

Crawling ever so slowly out against the ebb we finally reached the point were we could surf. Unfortunately I found us a little to close together for comfort and let some good waves go by to avoid potentially coming together. But everyone got in some great rides. I had my bow toggle drumming a tattoo, while Mike and Denis both buried their foredecks.

Eventually we agreed to paddle straight though the race to come out the other side. I took off for one more surf ride with the intent of paddling up above the race to get the maximum ride. This proved impossible as I couldn't make any headway. In fact all I was doing was maintaining position.

When ever I stopped paddling to look around for my companions I would lose any forward headway I had managed to eke out.

The last look about turned up one paddler short. Quickly I scanned 360 but could still see only one other kayaker. I called out where's Mike and set up a ferry glide angle to take me over to the reef to calm waters to have a better look. denis joined me and we soon spotted Mike flying through the race. For moments three quarters of his boat would be out of the water as he exploded through a stack. The black Tahe Greenlander looked beautiful in full flight.

From south of the race we set up a ferry glide over to Strong Tide Islet then clawed our way through the north cut into the lagoon and slipped down to the sluice were we played breaking in and out of the current rip.

At days end I did a quick roll, dragged the boat up reloaded my kit and came home to begin a week long battle against what appears to be the N1H1 virus. So much fun followed by so much misery. The photo is a snap of Hans Heupink's Anas Acuta after a hard surfing day in Holland.
Posted by Victoria Kayaker at 12:40 PM