Shephard and the Albatross 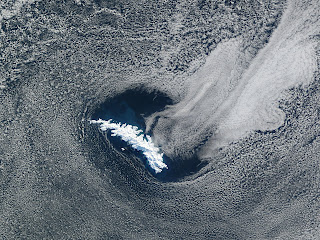 The following was written back in July. I've been reluctant to publish it because I consider the trip that is being planned to be extremely dangerous. Is it wise? I do not know, but it'll take guts, knowledge and perhaps good fortune to complete. It scares me just thinking about it.

Hayley Shephard is trying to raise awareness of the plight of the Albatross by solo paddling around South Georgia this coming February. She's an experienced kayak guide who works in the Arctic and on South Georgia Island.

This has never been done before indeed the island has been circumnavigated by kayaks only twice; both of those expeditions consisted of three kayakers. To date Hayley has lined up a publisher for a book, a film editor for a documentary and three magazines to publish accounts her her efforts.

Hayley is raising funds that will go to the Save the Albatross Campaign. "www.savethealbatross.net"

However Hayley is in desperate need of sponsorship funds. The British Government which governs South Georgia has very strict regulations regarding access to the area. Hayley has been in contact with the Royal Geographic Society and has made an application for support.

If you want to help here's the link to her project site. "www.kayakingtosavealbatross.com"

In this day an age many strike out on adventures, that seem only to full fill the persons need for self aggrandizement, it is especially gratifying to see that there are those who will undertake such adventures not solely for there own self fulfillment but for the advancement of important causes.

Nigel Denis is one of three British paddlers to circumnavigate South Georgia. Recently I asked him what's the most critical aspects of a solo paddle around the island.

His response, "develop lots of strength," surprised me but when he explained I understood. He said strength is needed to cope with the high winds. Nigel estimated they paddled in winds between 25 and 45 knots 40% of the time.

Technical skills are secondary to brute strength. I was somewhat surprised to hear that. Nigel also warned about fur seals which like to attack kayaks. When Nigel's team landed they used their paddles to fend off the seals. Do not confuse fur seals with the relatively harmless harbour seal. Fur seals are aggressive.

But most importantly he says taking the time to wait out the weather is key. Freezing cold, high winds, no reasonable back up. Hayley's support vessel well seldom be close enough to provide emergency support.

The following is a quote from Jeff Allen's blog account of the 2005 trip around.

“Fur seals are very aggressive, as is the weather, very unpredictable, went from a force 4 to a force 8 in seconds today, took Pete by surprise and capsized him, water is freezing, after ten minutes hands and feet are freezing.

“The challenge to paddle around South Georgia has been considered by many to be the ultimate challenge to any sea kayaker, comparisons between it and K2 to the climbing world have been bandied about, but South Georgia is truly unique and stands alone in the challenges that it does present, it certainly didn’t disappoint us.

We had the best and the worst that mother nature had to offer, when the going was good we made as much progress as we could, forcing ourselves to extend the limits at times to which you would not normally consider reasonable, over and above the norm.

When the weather was really bad we had no option, paddling wasn’t possible. The hardest thing to judge were those gaps in-between, seeing a weather system form overhead and wind increase from a force 2/3 to a full force 9 in the space of minutes was at times very frightening, especially when you were half way across a five mile open crossing.

All of the usual safety nets kayakers back home take for granted, VHF, Coastguard, RNLI even mobile phones were none existent and we knew that down here we were on our own, a self contained unit having to work as a team and being able to trust collectively in the decision making process meant so much more when making daily goals.

Although we had to have a support vessel to satisfy the license, the only time we saw it was when the weather was sound, if things turned foul they needed to head for cover as much as we did, what a seventy foot yacht considers appropriate shelter is well removed from what a kayaker would consider to be appropriate.”

A yacht such as Pelagic Australis can always head for open water, for us we had to take exceptional care when undertaking crossings, always looking for changes in the clouds, looking at the surface of the sea and reading the flow of water becomes second nature, if it hadn’t we may well have suffered for the mistake and this could have been a different update today.”

Prior to speaking with Nigel I talked with Dr. Fred Roots, a Royal Geographic Society member and gold medalist and an a renowned Antarctic and Arctic Scientist.

He was very cautious which is not surprising. One does not get to be an old Antarctic hand without paying close attention to due diligence. His first concern was with rescue.

In the past when Antarctic adventurers have messed up or been overwhelmed by the environment the only possible response to the Mayday would come from a scientific research project that might have taken years to put together. With limited resources the scientist would be expected to respond. This could mean the end of the research project. Years of work ruined by some adventurer.

Bitterness or resentment in the scientific community is understandable. By and large these pioneering scientist are hard men and women. Their projects in the 1950's and 60's where entirely self reliant. There was no safety net. When Dr. Roots geological partner had to have an eye removed after a shard of rock pieced it, the surgical tools where fashioned from a dinner knife and fork. The operation was done without either a loco or general antithesis.

The instruction were provided via Morse code from a surgeon in London. Think about it. Instructions for eye surgery locked in a series of dots and dashes.

While doing his geological survey Dr. Roots traveled solo via dog sled across the frozen ice , going unsupported from food cache to food cache for over 200 days. He had a compass.

Today The Royal Geographical Society will not allow people to undertake such adventures without means of rescue. She's had to charter a boat. But even that may not be sufficient.

There will be places on the west coast where the boat will not be any closer then three days travel. If disaster befalls her the reality is the rescue may in fact be a recovery.

Regarding the plight of the Albatross Dr. Roots pointed out that while it's an honorable endeavour that Hayley is undertaking. It may be fruitless. He explained that long line fishing practices around South Georgia have already been modified in attempts to ensure Albatrosses are not caught.

How easy is it going to be to get a long line fisherman from Port Hardy to voluntarily change the way they fish? Fishermen cannot even agree on a plan to save the salmon fishery.

But as Dr. Roots explains even if the entire world's long line fishing industry adopts these practices the Albatross will likely disappear. Victimized by humans rapacious harvesting of the sea. They'll starve to death. The future seems bleak for the Albatross.

All these factors add up to perhaps one of the most dangerous expeditions to date. Anyway you look at this it cannot be sugar coated. The endeavour is frightening and the goal maybe fruitless, but I hope she's successful.
Posted by Victoria Kayaker at 6:40 AM