Click on the headline for a view of Haro Strait during the calm before the storm. 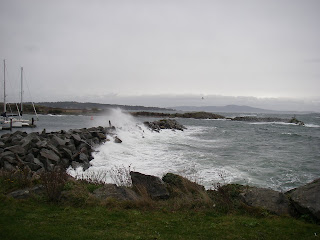 After a weak of laying about dealing with pig flue I had to get out. So I grabbed my binoculars and camera and headed out to do a little storm watching. Locked inside my car who could I inflict with H1N1 except the occasional car jacker.

Down along the shore front I found a Gale blowing. With nothing else to do I followed the shore up past Willows Beach, around to Cattle Point with a quick stop at Cadboro Bay. 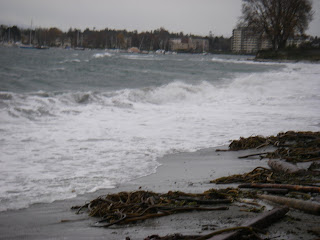 My real destination was 10 Mile Point, Cadboro Point and of course Baynes Channel. Along the short drive I worked up mind exercises figuring out how and where to launch, what heading to paddle, how the southeaster would surf the boat and where to pull out. 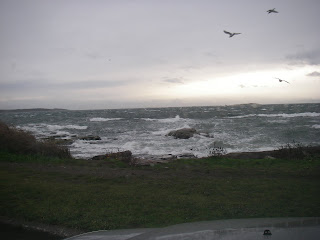 I have a close friend who once while standing on a beach looking out at a much smaller sea turned to me and said, "I have to get out and practice in that stuff more." I replied. You don't have to get out and do anything. If you were standing here alone would you launch? "No, I wouldn't," he replied. Well if I came along and asked you to launch would you? "No properly not."

There, you see that's good judgement and that's all you ever need to practice. Lets go for coffee.

Alas I was too afraid to walk into a coffee house coughing and sneezing pig virus so instead I slipped into Cadboro Bay and jogged over to see if any yachts had slipped there anchors and blown ashore. One came ashore last week and the thieving wreckers had pulled all the electronics out of it before the owner could secure it.

Sadly there is an small ugly undercurrent to gentile Victoria, composed of people with no morals and clearly no respect for the law. Luckily, at least when I stopped by no boats where on the beach.

Back in the car I made a quick trip to the view point on Prevost Hill and snapped a quick shot of 10 Mile Point 200 metres below. 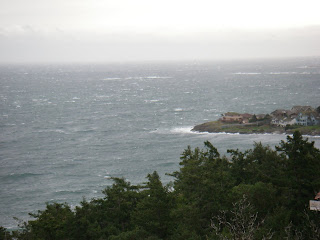 I was estimating the wind was blowing a steady 40 knots and the sea on the Beaufort scale to be Force 7. But it's hard to estimate such things from the pan of a kayak let alone the seat of a car.

After a brief stop at Cadboro Point and 10 Mile Point headland where I shot the video I headed home. I put some soup on and as I was uploading the photos I noticed the trees were really whipping around. the wind was picking up At 7:30 PM I checked the ocean buoy reports: Kelp Reef in Haro Strait SSE 48-63 knots, Discovery Island SSE 45 gusts 56 Weather forecast Storm Warning Winds SE 48-63. That's Force 10. I made coffee.
Posted by Victoria Kayaker at 6:31 PM