Back to Possession Point 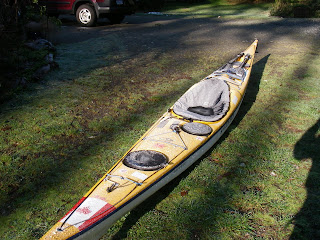 Brilliant but cold. By 11 AM the temperature had barely reach 3 C. Ice ponds had frozen on the top of my cockpit and hatch covers. Wherever the previous days rain drops had clung to the kayak there was a diamond of ice. 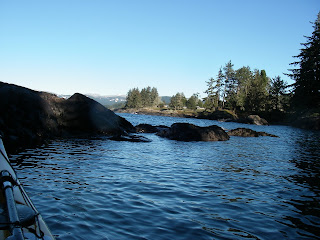 But the sea called, so after an unusual amount of foot dragging I had the boat into the water. The plan was to go out to Possession Point and shoot a series of rapid 10 second photos of the kayak as it shot through the surge channels.

I am such a Luddite. Just to be sure I slipped a spare battery into my jeans pocket before leaving home. Half way out to the Point I pulled out the camera set it up in the suction cup holder on deck and fired off a few photos. 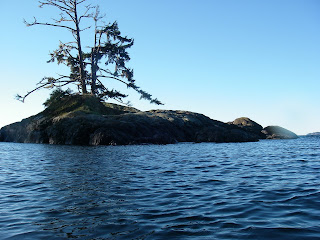 The screen went dark. Dead battery. Spare still in jeans on end of bed at the in-laws. Way to go Homer. I pulled the camera off the deck and decided if there wasn't going to be any photos I might as well play hard in the swell and the rock gardens. The next two hours slide by until I realized I had no feelings in my toes.

I had good wool socks on inside the dry suit but with my feet squeezed into neoprene boots there was little loft in the socks to keep my feet warm. I pulled off the day hatch and dragged out a fresh crab meat sandwich. But once my hands were out of the pokies my fingers froze up like popscycles. It was time to head home. Just over two hours and well under 5 nautical miles but a great beginning to a new year.
Posted by Victoria Kayaker at 11:59 AM