Bound for the Isle of man 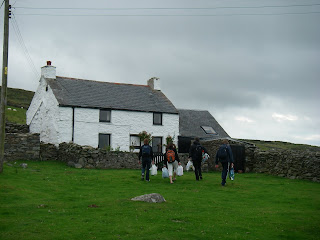 Figuratively this journey I am on started almost five months ago in reality it starts tomorrow when my good friend Mike O'Connor picks me up at 11:00 and drops me at the Swartz Bay ferry terminal. I'll kick back on board for the hour and half ride to the mainland then take the bus to YVR (Vancouver). I'll spend the afternoon sorting out the details of how to import and pick up a 16 foot kayak so that I'll have no surprises when I return. I'll double and triple check with Zoom Air to ensure they will indeed transport the kayak home.

Zoom has assured me all I need do is show up in Manchester with the kayak in tow and they'll bring it back to Vancouver for only $120. I'm hopefully skeptical. When I arrive in Manchester I'm going through the details, producing my documents and essentially getting it in triplicate that the kayak will get aboard the plane with me.

Gareth who has become much more then just an in law arrives 20 minutes after I do we'll meet at the car rental agent and then head off to the cottage in Snowdonia. That's it above.

After two weeks of interrupted renos, there will be trips to the pub, one to Cardiff, one to London, one to Holyhead, maybe even Dublin we should have accomplished very little in the way of renos but put in the maximum of good times. Then on or about, one has to be flexible when dealing with the continentals, August the 16th I'm off to Liverpool and the ferry to the Isle of Man. I've promised to help out at the Isle of Man kayak symposium, I'll be the simulated drowning victim, so the actual circumnavigation will start a few days after I dry out.

As I write the Canadian Cancer Society has been enriched by $5,195 which will go to cancer research. I hope to top that up by a bit more while in Great Britain and will hopefully be able to add a wee bit more after my return.

With some luck I will be updating my blog if not daily at least before and after the start of the journey around the island. I'll keep you posted.

To all those wonderful people who donated to the Canadian Cancer Society you have my most heartfelt gratitude. It's been your contributions that kept this project moving forward. And here comes yet another shameless plug if you know of anyone who would like to make a contribution they can do so online by Following this link

Thanks and the next update will be from Wales.
Posted by Victoria Kayaker at 4:16 PM