Slept in late and missed the 9 AM paddle launch.  Hmmmm!  I thought about throwing the kayak on the roof and rushing down to the beach to try to catch my friends.  I rolled over and slept some more.

Around noon I decided to ride up to Swartz Bay and catch the ferry to Salt Spring Island.  Down to the garage, jump into my riding gear and out the door I went.  Hmmm! Ferry departs at 1 PM.  It's 12:31.  This will be interesting.  Google Maps says it'll take 31 minutes to travel the 31 miles to the terminal.

I make it with, ah how shall I put it, time to spare.

After an uneventful ocean cruise to Fulford Harbour I ride up one side, back and forth across the island then down the other and pull back into Ganges the heart of the last outpost of the alternative life style back to the earth movement. 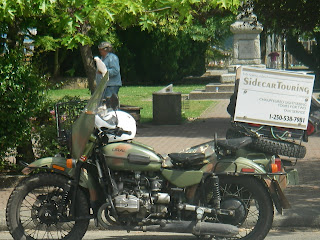 The Tree House Cafe, reminds me of the Teton Tree House  a Bed and Breakfast I once stayed in outside of Jackson Hole Wyoming. So I give it a try.

I order a $14 cheese burger with salad and coffee. The staff consists of vegan granddaughters of aging hippies.  The girls are squeezed into tight 100 % hemp blue jeans, with conspicuous thong straps peaking out above the waist line, they wear tee shirts tie died with shade grown salmon berries from a natural watershed, kissed by sun dabbled rays diffused by peach trees planted by Pika Rose-Blossom in the summer of love.

They shudder at the thought of red meat.  I secretly smile.

Lunch arrives and as all wana-be French waiters do, my waitress arrives to ask,  "How is everything," just as I take a large bite of burger.  I look up into those doe like eyes and let some savoury juice dribble from the corner of my mouth, as the juice slides down my chin I reach for my napkin and say, "it's excellent but could I have a glass of  Chianti.  She flees.

Times passing so I leave  $20 on the table and head for the bike.  It's 3:45 PM the next ferry is at 4PM.  Why not.  I sedately leave Ganges and the sweet smell of illicit smoke.  As I climb up out of the town the beast explodes and I rip past a line of cars.  The next few miles blow by as a series of left, right, left, leans, down shifts, up again, hard brakes, accelerate until I emerge from that last corner to see the ferry 20 feet from the dock. Leaving. 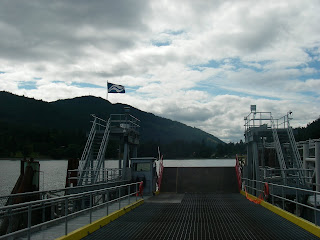 Nice dock but the ferry is missing.

I park and walk over to the coffee shop and order a latte.

"Excuse me I only want want a latte.  Oh it's $5 for the coffee.  I'm sorry I thought you were asking me for this months rent."  I walk outside with what I hope will be the greatest coffee I've had since France.  It's not.

Hovering outside the Organic Clothing store staring at a line of Sanskrit  head scarfs I have a flash back.  I'm back in Roschdale, 17 years old, in a basement with my best friend and a bald guy who says he's a Buddhist.  Could be true.  My religious exposure extends to Catholics, Protestants and one Jew, Sam Cohen, who buys Pike, a fresh water fish, from me. I've illegally speared them in streams in the spring run off.  He pays me $1 a fish.

In the basement we're making silk screened scarfs and tee shirts on this giant frame.  Gold paint is poured over the screen, the Buddhists pulls a slide runs across and the paint is forced through the pattern on the screen and into the cloth below.  Back and forth until the Hindu God Shiva appears on the cloth.

Reg, my friend, eventually drifts away.  Oddly we both end up in Edmonton years later.  He on one side of town me on the other.  Separated by too many experiences and an eternity of time.

One day his preschool son returns from kindergarten, walks to the end of the dock by the house and topples in.  The books in his back pack hold him under and he drowns.  Reg owns a bookstore.

I'm a new dad but I'm too scared of the bad karma to reach out.

Funny what an organic clothing store and $5 coffee can dredge up out of the depths.  For me Salt Spring Island is losing a little bit more of its charm.

Posted by Victoria Kayaker at 10:26 PM