Took a Little Trip Awhile Ago

Easter Sunday I chased a gang of kayakers out of Pedder Bay.  They were claiming to be the South Island Sea Kayaker's Association (SISKA) but I think they may have really been the Diablo's or maybe members of Madame Cheng's pirate horde.

After a month of conducting intensive hull repairs to the Romany Surf and the HV Explorer, intensive in the sense that the hulls are covered in scratches a few gel-cracks and one cel-goat hole, I had one of the boats ready for sea trials.  Fibreglass boats are great.  Just bash them about all winter long then gel-coat the damage in the spring.  Of course this only pertains to "heavy" British boats, all others would have been holed through after the abuse I throw at kayaks.

Over the winter I'd developed a leak in my skegg box of the Romany after a particularly hard landing on a rock.  I brought the boat in dried in out by sticking my wife's hair drier in the aft hold.  Next I covered the hatch with a special hatch cover that I have drilled out and put a bicycle tube valve in.  I pumped up the pressure up and soaped all the deck pad eyes and the skegg box.  Once I'd determined the box was the leaking I did a gel-coat repair.  Repeated the process and found I still had a small leak and went at it once more.  With the left over gel-coat I filled the worst of the scratches and demelled out the spider cracks and filled them.  Then it was wet sanding, wet sanding, and finally polishing and waxing. 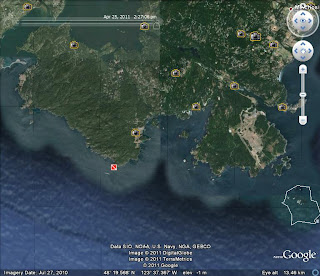 Pedder Bay is the tiny little inlet on the middle right of the photo.  I loaded the kayak with enough gear for an over night out on the East Sooke Entrance where my in-laws live.  The gear was just in case I found my self out-lawed. My finial destination was on the extreme left of the picture just where the shore curves around the spit of land (Whiffin Spit) 12.5 Nautical miles from the put in.

I caught the pirate gang just past Rocky Point as they were about to land on a beach.  I slipped in behind some rocks and raised them on the radio.  With my best authoritative voice nearly correct radio protocols put the fear into them as they were about to land on a restrictive Department of Defence beach.  But I couldn't keep up the ruse, besides I need to land as well.  I'd averaged just over 4 knots and covered the distance from the put into to the bay in just under an hour.  At least half an hour faster then the gang.  After lunch I continued west while they turned back.  I completed the trip in four hours riding a favourable current the entire way.

At the Fish Trap Shack beach on the East Sooke Trail I surprised and Otter.  He had just fished a spider crab off the bottom when I slid quietly right up behind him.  He spy hopped half his length out of the water and his big brown eyes fixed me with the most reproachful stare before he splashed back into the deep.

Further west I came up on a seal sleeping right out in the middle of a crossing.  I quietly came up from down wind and could see him bobbing in the waves with his eyes shut.  He was only a paddle length away and didn't wake until he caught a whiff of me as I moved up wind.  Kayakers do carry a distinctive odour.

Work on the HV Explorer will be complete by weeks end.