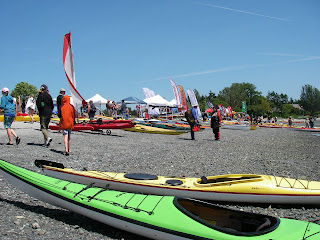 As I'd just returned from a torturous week of job training in Vancouver I was more then ready to decompress by hooking up with fellow kayakers to swap lies and fill our boots with the usual banter about hard versus soft, rudder versus skeg and so on.

I did promise myself that I would not paddle any boats. As I explained to my friends I simply cannot afford lust.

My resolve lasted about an hour before I succumbed to the call of Valley Kayaks Avocet LV. Luckily I didn't fit, so on to the Nordkapp LV model. This boat could be made to fit if I removed or reconfigured the seat. 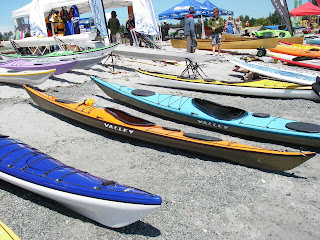 But why bother as I found it not nearly as good as either my NDK Explorer or my Romany S. The profile of the hull of those boats suits me better then that of the Nordkapp. I'm not knocking the Nordkapp and encourage paddlers to try these boats. In fact I suspect the Nordkapp may make you a better paddler over the long term. It simply demands more from the paddler.

I also found water in the day hatch of one of the models. It could have come from a poorly snapped down hatch but always check these out.

Eventually I found myself in the standard Nordkapp which even in the light winds (10 knots) really wanted to weather cock; likely due to the higher fore deck.

The kayak that most impressed me however was the venerable old Anas Acuta. Dating from the 1960's this is the grandfather of all English fibreglass Greenland style boats. After a short paddle I easily understood why this boat has remained so popular.

Ironically it was the boat that most mirrored the handling characteristics of the NDK now Sea Kayak UK or SKUK line. The Annus Acuta's hard chines are clearly the forerunner of the softer chines of the Romany and then the later Explorer. I suppose that should not be so surprising after all Frank Goodman, Nigel Denis et all go back along ways. What's odd is that the link between the Annus Cuta and the NDK or SKUK line seems stronger then that between the Annas Acuta and the Nordkapp. Interesting.

But the boat that stole the show was the Tahe Marine Greenland. Wow! Done up all in black this Estonian wonder woman is the ultimate fibreglass Greenland rolling machine. I witnessed money leaking out of Mike Jacksons pocket. First a couple of standard rolls (there goes a down payment) followed by some more complicated rolls and another payment until finally he'd bought and sold himself on yet another addition to the fleet.

I'm betting there will be a black beauty in the Jackson coral in short order. As for me I stay well clear of fast sleek women wearing black.

Interesting post you got here. It would be great to read something more about that theme. The only thing your blog needs is some pictures of some devices.
David Stepman
Phone Blocker