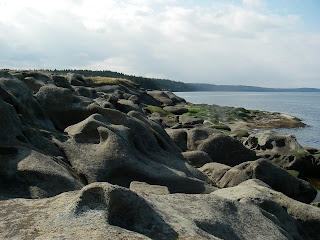 Drove up to Nanimo today and caught the ferry over to Gabriola Pass. I was hoping to find some nice currents to play in but it was one of those west coast days that we call our freezing friends in the rest of Canada about. "We're wearing t-shirts and shorts the weather's wonderful. What? You've got 60 cm of snow. I can't imagine." (Click on photo to enlarge)
In other words it was flat calm. So I turned it into a tourist trip. There were lots of Harlequin ducks, some Old Squaws, and some Bufflehead's, otters, two small sea lions and of course lots of seals.

I paddled out to Bath Islet. Years ago I visited the islet with some friends and a strange woman who said she was an experienced paddler. But it turned out she was talking about something else and knew very little about kayaking. It was a shame because on that day there was a Gale blowing and we wanted to go out into Georgia Strait and surf the down wind waves back to Gabriola Pass. Standing on Bath watching the wind waves rushing through the Flat Tops she asked if we would go out there. I turned to her and said something like, "You'd die out there."

Bath Islet is either named after Sir Nigel Bath 4th son of Lord Less Bath and Lady Sofa Chesterfield. Young Nigel allegedly named it after his ancestral home. Or it may have been named by the local indigenous folks who used the various eroded bath tubs to wash up in. Either of these theories is suspect. I stumbled upon them while doing serious research at the Crow and Gate in Cedar where the publican serves Guinness at the proper temperature. Photos of Bath Islet follow. Gentlemen do not take photos in pubs.
Posted by Victoria Kayaker at 9:35 PM