Tuesday was a great day to be on the water. We started off with a nice bit of south east swell being pushed along by a dying SE wind. Maybe 15 knots. Earlier in the morning the wind was blowing 22 knots at the Discovery Island light house.

When we slipped out of Rat Bay into Enterprise channel we were met by some metre high waves. Both Dan and I were hoping things would build but for the most part conditions remained the same for most of the day. There was a minimal flood flowing for the first half of the trip and we'd hoped the sea might start to rock and roll as we came back down Baynes and through the Chain Islets but other then the current push not much happened.

That is until we turned west to re-enter Enterprise Channel. Here the swell caught us from the aft port quarter but for the most part was running too fast to catch any meaningful rides. 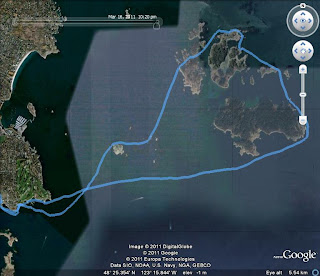