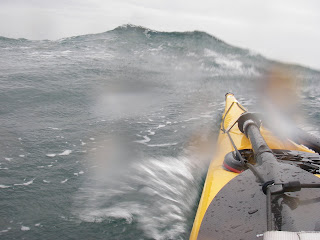 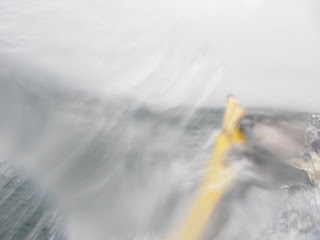 Jesus, Mary Mother of God! What a day to be on the water. The tide race at Baynes Channel was a monster. Something took possession of the tide race today and created conditions that from shore were totally deceptive.

The winds were blowing a steady 15 to 20 knots out of the South-east and were stacking up what appeared to be 4 and 5 foot wind waves against a 3.75 knot ebbing currant about 150 metres off shore.

As the waves were breaking much further out it appeared things were not as chaotic as the trip out to Baynes a few weeks back. Appearances can be deceptive. From shore Mike G., Dorothea, and myself decided to paddle North east and surf off the edge of the tide race. From that point I wanted, after catching, a few rides to swing about and ride the current straight through the race and come out the bottom.

Simple plan. I hung back setting up the camera to take a series of automatic shots here's the link http://picasaweb.google.com/gordwarner/BaynesChannelFeb0109#" Just as we were about to enter the race we were joined by my old friend Craig Lylack. He'd been out for a half hour and thought conditions were about the same as when he'd started.

I followed Mike into the race and came about and tried to catch some of waves back toward shore. But these beast were bigger then the 4 and 5 foot I'd estimated most were 8 footers with some larger monsters. Mostly I found myself going up and down and making little head way back against the 3.75 knot current.

On one up ride I caught a glimpse of Mike, but saw no sign of Dorothea. It was a struggle to look around and stay up right. Try as I might I could not see any sign of her and was growing worried.

My position was also becoming more and more tentative as I was slowly being pushed south-west towards the rocks. I decided to move offshore by again by heading north-east away from the fixed light on the rocks. As I was doing so Craig came within hailing distance and asked what Dorothea was paddling.

He then told me she was on the rocks. I took this to mean she'd come out of her boat and had been washed into the shore. Turning south-west I smashed my way through to the bottom of the race where I could see two-thirds of a kayak on the rocks but no paddler.

As I drew nearer I finally saw Dorothea high up on the rocks and eventually could see the stern of her boat. It had been obscured by a rock. My heart slowed down a beat or two.

From below the tide race Mike, Craig and myself compared notes. Wow, loose hips but very tight sphincter muscles.

Nevertheless we decided to paddle out and back up through the race. Off we headed, Mike was soon being pushed back in toward the buoy light on the rock. Craig quickly put a lot of distance on both of us. I tried to head out further then up into the tidal stream but also found myself being shoved back towards the rock. Both Mike and I bailed. Craig carried on and got roughly into the top of the tide race and stalled there for the next 20 minutes.

I shouted to Mike to stand by as we might be making a rescue at any moment.
Mike paddled up inside the rocks to keep and eye out for Craig at the top while I stayed on station at the bottom of the tide race where he'd be flushed out if he was to come out of his boat.

For the longest while I watched as Craig's paddle wind milled through the air, he was going up and down but against San Juan Island in the background I could see little forward progress.

I know this man to be tough and strong and I was beginning to think he might be stupid as it seemed inevitable that he'd tire and be overwhelmed. For a time he'd make 15 to 20 feet then be swept back. Then I saw him get knocked over and sink behind a swell. I thought that's it; but he rolled or sculled back up.

Then when all appeared lost he caught a lull and was able to surf out of the north-west end of the tide race. He made straight for his put in site too tired to come down to us.

While he was fighting to get out I kept saying, "come on just turn the boat and let the current flush you back down here to the bottom". It's what I would have done. But he hung in and eventually made it through. A determined bit of paddling.

I swung back to the rock where Dorothea had come ashore. She'd repositioned her boat to the lee side of the rock and pulled it completely clear of the water. But while watching the struggle out in the race the wind had blown her kayak right off the rock. Luckily it had been blown straight into the gravel beach in front of the famous Williams glass house.

We got Dorothea reconnected with her steed and called it a day. Total time on the water maybe two hours.

As an aside I recently read a review of the new Delta Double where it was claimed to be a good rough water handling boat. This was concluded after it was taken to Skookumchuck and surfed. I don't know how it was paddled at the "Chuck", however surfing the front wave is not a true rough water test. Successfully paddling the tide race behind the front wave that's a test.
Posted by Victoria Kayaker at 10:20 PM

Golly gee whilikers! (or more coarse and foul language) Sounds like you guys had one hell of a ride.
We call that tidal race "The Freight Train" for a reason, y'know.
My paddle partner got similarly caught in it last year and like Craig just kept going, in his case across it, instead of letting the current carry him away & out of the standing and pounding waves.
Amazing how paddling in the Cadboro Bay area can give such a range of challenges, from easy doddles suitable for a first-time child paddler to the kind of powerhouse workout you describe.