If you should ever find yourself travelling along the A55 in North Wales there's a small village, Bodelwyddan, just off the motorway. The village is recognizable by the tall white church and steeple. Next to the church is a grave yard. Eighty five of the graves are those of Canadian Service men and women who died at Camp Kinmel in 1919; long after the great war had ended. 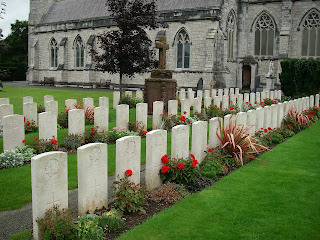 I discovered this remarkable place where else but in a Welsh pub. My host was regaling me with the conflicting histories and myths surrounding this cemetery.
Many local Welshmen believe that the Canadians died during a riot at the hands of British MP's sent to quell the riot. Some people believe many of the soldiers where lined up and shot by British firing squads.
My friend Peter told me of accounts he had heard from aging seniors who could remember their parents and grandparents telling them how the Liverpool MP's shot the Canadians.
Tonight in Victoria the fog has rolled in off the sea. It's drifted down the streets and lanes obscuring the reality that's just outside my window much the same way that time, fear, and a misplaced sense of propriety has blurred the truth of Kinmel.

Buried deep in the passage of time are the kernels that have given birth to some fascinating myths. An Internet search conducted in Great Britain turned up a treasure trove of arguments, points and counter points. Conspiracy theories abound.

Some believe the soldiers where being held in Kinmel because Canada didn't want them back. It was argued that unemployment was so great that Canadian politicians didn't want to make the situation worse by bringing home it's service men. Another account held forth that Canada was in fact expelling all "foreigners" from the country and that these men where mostly east European and were no longer welcome in Canada.

Anyone with a decent education in Canadian history would dismiss these accounts.

This much is certain. Troops where held at Kinmel awaiting transport back to Canada. Troop ships were in fact diverted to take others back. In fact recent recruits who saw no action were some of the first to return to a hero's welcome in Canada. Back in Kinmel veterans of four years of hell sat in the mud and cold waiting for boats that seemed would never come.

Conditions in the camp where not much better then those the soldiers had endured in France. Food was poor, there was little coal for stoves as there was a coal shortage due to a British coal miners strike, few blankets and rain soaked mud was everywhere. This whole area is only meters above sea level and catches all the foul weather blowing off the Irish Sea. Sitting through a winter here would have been difficult. To keep the men occupied the officers drilled them daily. Marching up and down relentlessly through the mud too no purpose began to have an unanticipated affect.

The quality and quantity of the food was also an issue. Some believe a lot of the food was being stolen by black marketeers. It was also certain that the men's patience was running dangerously short as they'd awaited months for transportation home. But the most significant factor at the camp was the affect of the world pandemic. Men were dying from influenza as were people all over the world. Most of those buried at Kinmel where felled by flue.

All of these factors are contributors to some of the myths surrounding Kinmel. But clearly what fired a lot of the tales was the initial Times account of what transpired on March 4th 1919. The Times portrayed the events as a Bolshevik riot organized by William Tarasevich a Russian/Canadian from Montreal.

Tarasevich with his east European name was clearly the wrong man in the wrong place at the wrong time. The Times recounts how a red flag was waved as the men marched on the officers barracks. Clearly the Times was looking for a scape goat and the Bolsheviks revolution in Russia was readily at hand. Blaming the riots on these sinister characters neatly deflected any criticism from the military administration.

Perhaps it's the distance but the Canadian accounts lack the passion of what I turned up in north Wales. Official army records show that one man was shot and that by accident as the round came through a window and struck him as he sat at a table. Wisely the camp commander had secured most of the ammunition long before conditions reached the rioting stage.

Sadly four men were in fact bayoneted, by the MP's.

Despite the conflicting myths surrounding Kinmel the local Welsh population take great care in the local cemetery. Walking up and down the rows of white gravestones and reflecting on our current war effort in Afghanistan I couldn't help but wonder what myths will spring forth over the next 100 years.
Posted by Victoria Kayaker at 10:27 PM